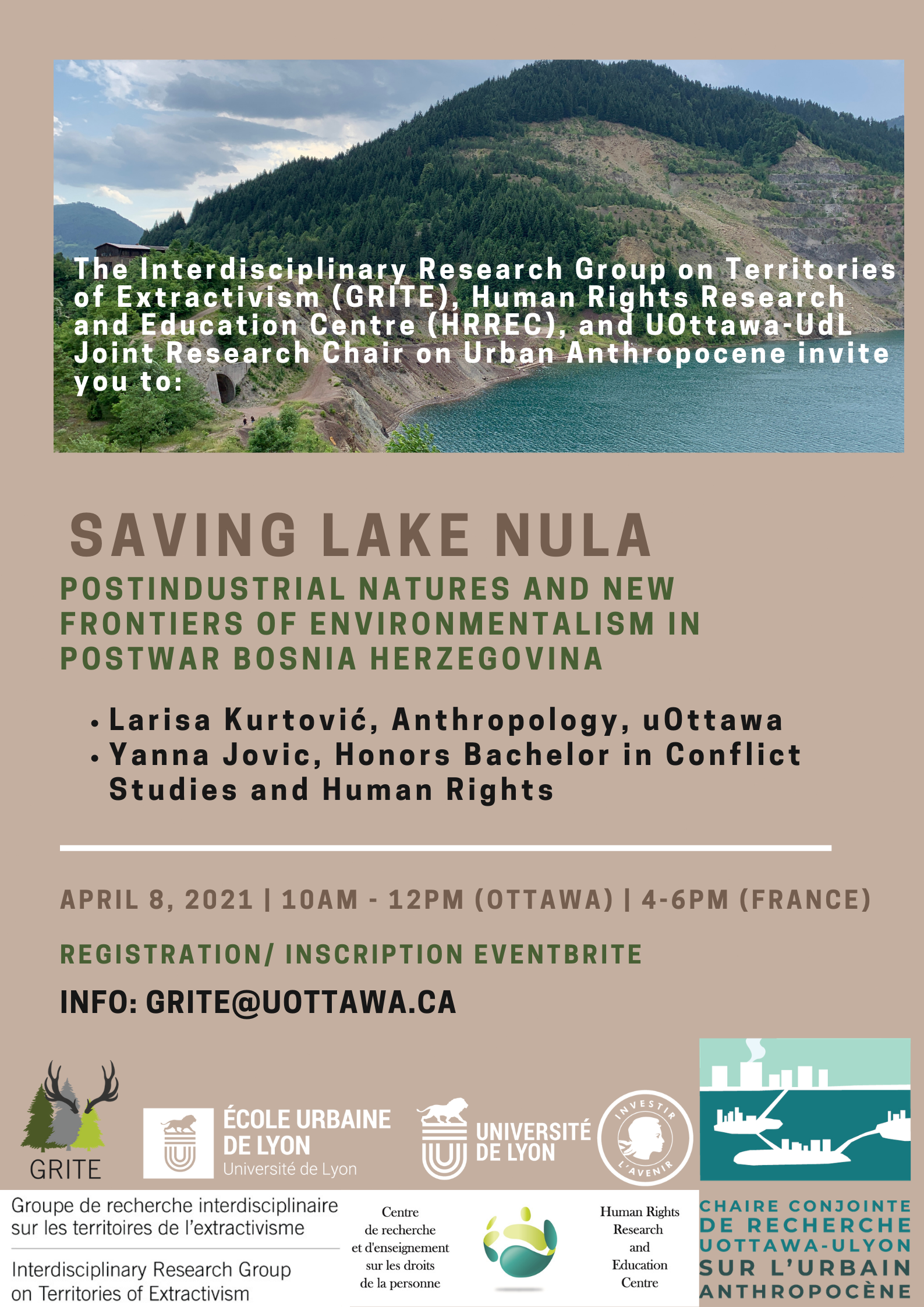 The presentation will be in English, followed by a bilingual French-English discussion period.

In 2018, an activist campaign in the central-Bosnian town of Vareš successfully challenged the EU-sponsored ¡Vamos! Program’s plan to test underwater mining equipment in a nearby lake “Nula” that formed out of the pit of the now-defunct coalmine “Smreka.” ¡Vamos! and its local partners claimed that this project might bring back jobs to this deindustrialized and depopulated part of Bosnia-Herzegovina. But the project’s opponents focused on potential environmental hazards this kind of testing, pointing to the murky ethics of bringing experimental technology to a poor country with weak environmental regulations. Both groups sought to position themselves in relation to the town’s history and present-day predicaments. Vareš was once infamous for its high levels of pollution caused by the local steelworks and the coal mine, but those activities came to a halt with the start of the 1992-1995 Bosnian War. During this time, the natural environment began to recover, and in some cases, overtake the industrial ruins of the steelworks itself. The newly formed lake became a recreational area, enjoyed by swimmers, fishermen, and picnickers. Hence, this reclaimed nature became central to the hoped-for economic revitalization of the region via ecological and rural tourism. What happens when postindustrial natures become a site of environmentalist concern? How do past experiences of pollution and toxicity shape the way local people think about environmental risk? And how do these local histories intersect with the new, trans-European regime of distribution of environmental risks and harms, exemplified by a project such as ¡Vamos!?

Dr. Larisa Kurtović is Assistant Professor of Anthropology at the University of Ottawa. She is a political anthropologist who conducts research on activist politics, post-socialist transformation, and the aftermath of international intervention in postwar Bosnia. Her ethnographic analyses of popular mobilizations, political satire and nationalist politics, have appeared on the pages of the American Ethnologist, Focaal, History and Anthropology and Critique of Anthropology among others. She is currently writing a book entitled Future as Predicament: Political Life After Catastrophe based on her long-term research in postwar-Bosnia, as well as working on a future graphic ethnography about worker anti-privatization activism with anthropologist Andrew Gilbert and graphic artist Boris Stapić. Her most recent research is focused on infrastructural and environmental politics in the postindustrial zones of central Bosnia.

Yanna Jović earned her Honors Bachelor in Conflict Studies and Human Rights with a minor in Sociology at the University of Ottawa in 2020. In the summer of 2019, she spent four months conducting an independent ethnographic research project in the central-Bosnian town of Vareš under the supervision of Prof. Larisa Kurtović. This research focused on the mobilization to save lake Nula, formed on the grounds of former iron mine “Smreka.” She currently works as a Program Advisor for Employment and Social Development Canada.